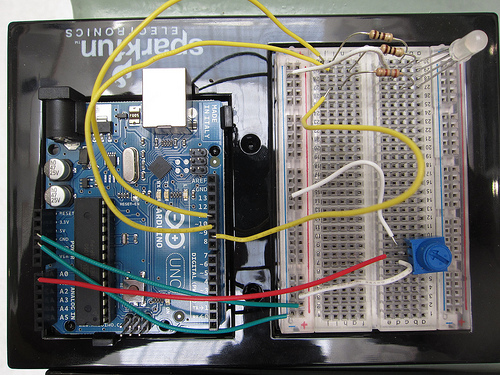 Hi,
Not sure if you cover this on your page or forum.
Looking for a price for a project if possible please.
Picked up your details from Internet whilst looking for someone to freelance Arduino Code.

What I am trying to achieve is to use an Arduino to control two small motors and give some voice prompts, but to be interactive for the voice prompts.
I think I can work out how to control the motors, but having looked at forums I have no idea how to do anything with the speech.

I have an Arduino Unit, which I have played with, but am now at the stage where I am getting no further (spent a year playing) and need some help with my project.

The above actions are all to happen, simultaneously on depression of one button on an IR or Bluetooth.

I am also looking for at least 4 other “verbal Commands” which can be activated individually upon pressing a button (ir or Bluetooth).

I am not looking to market this project, but am looking for the capability for users to “personalise” their verbal commands. This to be achieved by having access to the code and reloading the Arduino.

To try and explain the project, I am looking to use two 6V motors to raise a platform, by driving a leadscrew for an amount of time. Once the platform is raised, a voice prompt will be given, meanwhile a timer is running in the background. Once the timer gets to its predetermined “T” set, then the platform will lower back to its home position. The above is all to happen in sequence upon the operation of 1 button press or command send.
In addition to the above operations, I am looking for a further 3 or 4 commands, again programmable by the user and downloaded to the Arduino, which will be operated independently by the same IR or Bluetooth device (eg button press 2, 3 or 4 for example).

Is this something that you may be able to assist with and if so, are you able to put a project price on it or an hourly rate.

I have the lifting mechanism made, I have an Arduino UNO and the two motors. I also have small IR remote which came with the Arduino pack, so the deliverable, if interested would be a program that I can load into the Arduino, plus any other bits of hardware that may be required to achieve this.

The project is nothing to do with where I work, it is an outside interest.

Hello Bournemouth. Norwich here. Do you have any woodworking facilities and especially a wood lathe?